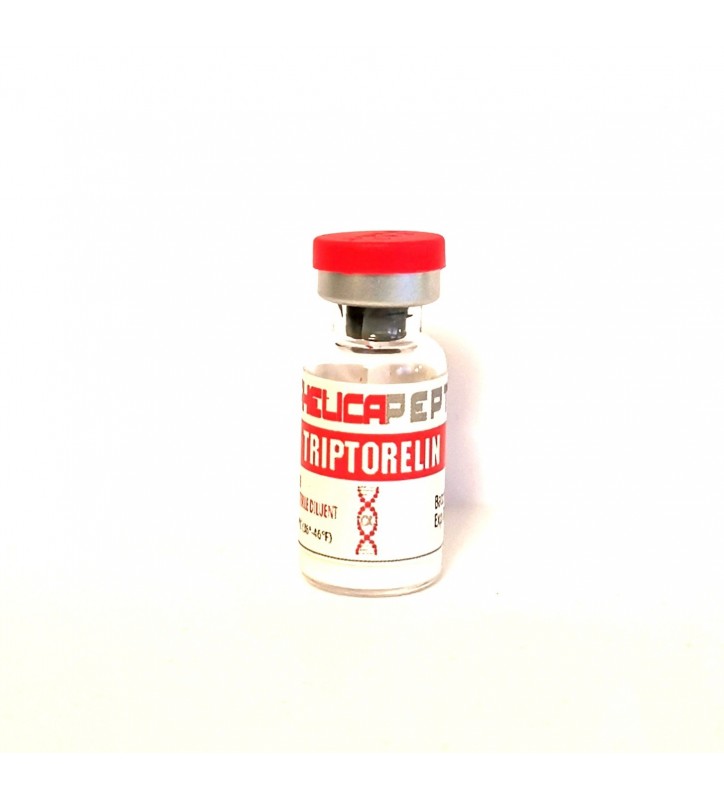 Triptorelin is an extremely potent peptide in its action and is very similar to the natural gonadotropin-releasing hormone, better known by the abbreviation GnRH. Like GnRH, triptorelin stimulates the pituitary gland to release hormones, such as the sex hormones oestrogen and testosterone.

As described above, Triptorelin stimulates the pituitary gland so that the body’s own hormone production increases dramatically. Particularly interesting here is the testosterone production. It’s for a very good that this peptide is so interesting for bodybuilders and bodybuilders who use anabolic steroids. For example, those who inject exogenously with testosterone or use steroids such as Trenbolone influence the body’s own formation of testosterone in such a way that it minimizes, or even completely stops (known as negative feedback loop). Normally, the pituitary gland directs that signal to produce testosterone directly to the testicles, which are subsequently responsible for production. For example, if testosterone is administered exogenously, the pituitary gland does not consider testosterone formation necessary, since practically enough is available, so that no signal for production is passed on to the testicles. There is virtually a production stop. The most well-known symptom of this is that the testicles are shrinking. This is not the case with all steroid users, but the situation is the same. If a treatment lasting several weeks or several months with exogenously administered anabolic steroids has been carried out and terminated, this leads to muscle loss, fat buildup, depression and a severely impaired skin appearance due to the lack of in-house production of testosterone, which as a whole is attributable to excess oestrogen.

Here is Triptorelin used. Triptorelin is very potent and its effects can be measured within a few days. This means that shortly after cessation of anabolic steroid treatment, the peptide Triptorelin immediately sends the signal to the pituitary gland to produce testosterone, which may take up to 4 weeks without Triptorelin, nor with conventional dietary supplements such as testosterone boosters level of Triptorelin can be brought. Thus, triptorelin is making a significant difference as a post-cycle therapy or post-cycle peptide, which will reset the testosterone level to “factory settings” as quickly as possible.

The hoped-for effect that Triptorelin quenches the receptors for the hormone testosterone quasi again, so that used steroids after a short time to achieve the effect as in the first cure is unfortunately a myth.

Because if you think logically then the scenario is as follows:
After a prolonged steroid treatment, the receptors are saturated or dense. After completion of the cure, these empty very slowly, depending on the ester used also faster. With the use of triptorelin, however, natural testosterone also docks back to these receptors very quickly, which makes the release of these receptors even longer in time. The effect on the receptors is therefore even inversely compared to what users hope for.

This point is extremely important, as a misdosing can have devastating effects. Just make sure that you comply with the following:

For the purposes of post-cycle therapy, it is common practice to inject 100mcg subcutaneously after completion of a steroid cure, for example, on the follow-up injection day of the last steroids injection. If you use several steroid cures a year, then at least 4 months have to pass between the administration of a triptorelin injection to avoid symptoms of chemical castration.

Repeated or overdosed use of triptorelin, however, leads to a reduced secretion of pituitary hormones after three to four weeks. This reduces estrogen and testosterone levels. About three weeks after the start of the treatment, or even a few hours after the overdose, testosterone levels are measured in the man equivalent to those after castration. Next side effects can be:
– Nausea
– Hot flashes
– Headache
– Irritability

The Product is prepared for LABORATORY RESEARCH USE ONLY!!! The product may not be used for other purposes.

22 other product in the same category

Gonadotropins are protein hormones secreted by gonadotrope cells of the anterior pituitary of vertebrates. This is a family of proteins, which include the mammalian hormones Follicle-stimulating hormone (FSH), Luteinizing hormone (LH), placental...
https://www.alphahelicapeptides.com/hmg-75iu USD 31.50 2020-12-31 In Stock
$31.50

Thymosin-beta4, better known as TB-500, is an extremely interesting peptide. Due to its extremely fast general and wound healing effect, it is a kind of healing booster for athletes after an injury to be back on the ball as soon as possible,...
https://www.alphahelicapeptides.com/tb-500-10mg USD 65.00 2020-12-31 In Stock
$65.00
Buy online from us