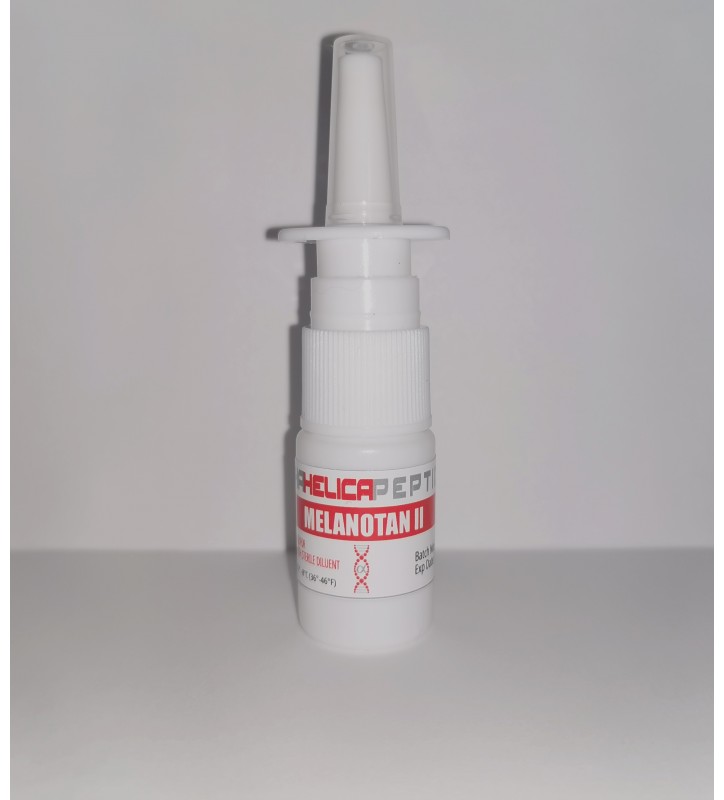 Melanotan 2 (also referred to as Melanotan II) is a synthetically produced variant of a peptide hormone naturally produced in the body that stimulates melanogenesis, a process responsible for pigmentation of the skin. This peptide hormone, called alpha-Melanocyte stimulating hormone or MSH, activates certain melanocortin receptors in the process of exerting its effects. Indeed, MSH also exerts potent influence over lipid metabolism, appetite, and sexual libido via these melanocortin receptors. As a result, Melanotan 2 has been shown in studies to exhibit appetite suppressant, lipolytic, and libido-enhancing effects in addition to promoting skin tanning. Melanotan 2 has been researched extensively for use in protecting against the harmful effects of ultraviolet radiation from sunlight due to its melanogenesis-stimulating properties.

Additionally, Melanotan 2 and a similar synthetically produced variant, known as PT-141, have been studied at length as a potential remedy for the treatment of sexual dysfunction; specifically, male erectile dysfunction.

The Development of Melanotan 2

The initial creation of the synthetic Melanotan 2 peptide can be credited to the University of Arizona. During the course of research aimed at developing a defense against skin cancer, focus was placed on developing a method of stimulating natural melanogenesis, or the natural production of melanin in the skin, without direct exposure to the potentially harmful ultraviolet radiation in sunlight. Initially, University of Arizona researchers attempted to directly administer the naturally occurring hormone alpha-MSH in order to elicit this desired result. Although this strategy exhibited promising results, it was determined that the naturally occurring MSH had a prohibitively short half-life to be of realistic use as a therapeutic remedy. However, the positive results gleaned from MSH administration encouraged further research into the development of Melanotan 1 and Melanotan 2, which exhibit similar effects whilst possessing an extended half-life for functional therapeutic utilization.

The effects of Melanotan 2 on the diet and food intake of the laboratory mice have also been investigated. It has been demonstrated that the central melanocortin (MC) has been activated by melanotan 2 when fed and induced in the mice. The six-day treatment of Melanotan 2 has shown that the peptide actually reduced the body weight and the adipose tissue in the viscera of the mice and suppressed the caloric intake of the organism. This has implications in clinical applications of the possible treatment to reduce carbohydrate or calorie intake especially for the overweight and the obese. Furthermore, the same study has also demonstrated that there was a sustained increase in the available oxygen consumption in obese animals. Melanotan 2 also helped reduced the level of serum insulin and the cholesterol levels when compared with the control treatments. Furthermore, it has been suggested that melanotan 2 actually lowers the level of acetylcholine A caboxylase expression and even prevented the reduction of carnitine and palmitoyltransferase I mRNA in muscle-type tissues by pair-feeding in the muscles of the obese rats. Moreover, the Melanotan 2 peptide actually increased the fat catabolism in the muscles and even improved the cholesterol metabolism (Li et al. 2004).

α-Melanocyte-stimulating hormone (α-MSH) is a naturally occurring endogenous Melanotan peptide hormone of the Melanocortin family, which is considered to be the most important of the Melanocyte-stimulating hormones when it comes to stimulating Melanogenesis, a process which in mammals is responsible for hair and skin pigmentation. α-MSH also plays a role in feeding behavior, energy homeostasis, and sexual activity (Bremelanotide and Melanotan 2). α-MSH is a nonselective agonist of Melanocortin receptors MC1, MC3, MC4 and MC5. Melanotan 1 and Melanotan 2 activate the MC1 receptor, which is responsible for effects on skin pigmentation. Melanotan 2 and PT-141 both stimulate the MC3 and MC4 receptors which are responsible for the regulation of appetite, metabolism, and sexual behavior. However, PT-141 Bremelanotide does not stimulate the MC1 receptor.

A few synthetic analogues of α-MSH have been investigated for their apparent photoprotective effects against ultraviolet (UV) radiation from the sun, namely Melanotan (afamelanotide) and Melanotan II, referred to as Melanotan 2. Bremelanotide, another analogue of α-MSH similar to Melanotan 2, is currently under development for the treatment of sexual dysfunction. All of these melanotan peptides have significantly greater potencies than α-MSH, but with distinctive selectivity peptide profiles.

18 other product in the same category

GHRP-6 profile: GHRP-6 peptide (somatocrinin-6) is a synthetic analogue of met-enkephalin. Also known as growth hormone releasing hexapeptide. GHRP-6 peptide belongs to the group called HGH secretagogues and was developed for its growth hormone-...
https://www.alphahelicapeptides.com/ghrp-6 USD 14.99 2020-12-31 Out of Stock
$14.99

Thymosin-beta4, better known as TB-500, is an extremely interesting peptide. Due to its extremely fast general and wound healing effect, it is a kind of healing booster for athletes after an injury to be back on the ball as soon as possible,...
https://www.alphahelicapeptides.com/tb-500-10mg USD 65.00 2020-12-31 In Stock
$65.00
Quick view