Gonadotropins are protein hormones secreted by gonadotrope cells of the anterior pituitary of vertebrates. This is a family of proteins, which include the mammalian hormones Follicle-stimulating hormone (FSH), Luteinizing hormone (LH), placental...
https://www.alphahelicapeptides.com/hmg-75iu USD 34.50 2020-12-31 In Stock
$34.50
Quick view

Growth hormone: What is it? 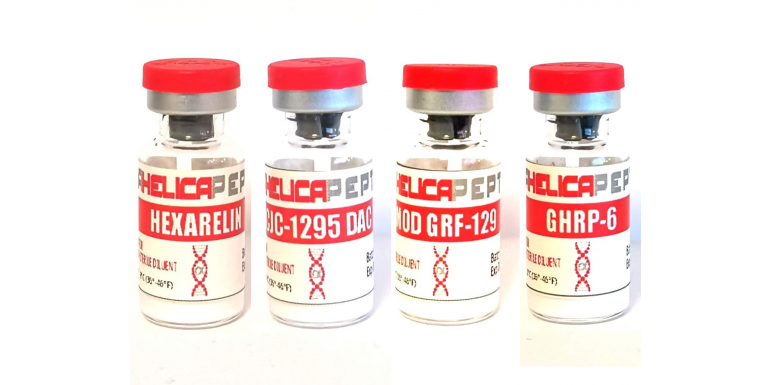 Synthetic Growth Hormone is an artificially created hormone “identical” to the major naturally produced (endogenous) isoform. It is often referred to by its molecular mass, which is 22kDa (kilodaltons) and is made up of a sequence of 191 amino acids (primary structure) with a very specific folding pattern that comprises a three-dimensional structure (tertiary structure). This tertiary structure is subject to potential shape change through a process known as thermal denaturation. While many labs can generate growth hormone (GH) with the proper primary structure, not all will be capable of creating a tertiary structure identical to the major naturally occurring growth hormone. The tertiary structure can determine the strength with which the growth hormone molecule binds to a receptor, which will, in turn, affect the “strength” of the intracellular signalling, which mediates the events leading to protein transcription, metabolism, IGF-1 creation, etc. It is this inconsistency that accounts in part for the differences in the effectiveness of various non-pharmaceutically produced synthetic growth hormones.

Growth Hormone is produced naturally in the anterior pituitary and to a smaller degree in peripheral tissue. The growth hormone is a blend of isoforms, the majority of which is the 22kDa (191 amino acid) variety with which most are familiar. In addition, an isoform that is missing the 15 amino acids that interact with the prolactin receptor is also produced. This form is known as 20kDa and although it binds differently to the growth hormone receptor, it has been shown to be equally potent to 22kDa. It appears that 20kDa has lower diabetogenic activity then 22kDa. The pituitary releases a blend of these two isoforms with 20kDa averaging perhaps 10% of the total although this percentage increases post-exercise. Currently, there is no synthetic produced for external administration for this isoform.

The growth hormone (GH) is synthesised and secreted by anterior pituitary cells called somatotrophs in a pulsatile fashion. It has been demonstrated that this pattern promotes growth. The pituitary is capable of rather quickly synthesizing very large amounts of growth hormone, which it stores large amounts in both a finished and unfinished form. As we age, we experience fewer GH pulses (i.e., releases of pituitary stores) that completely deplete these stores. As we get older, we do not lose the ability to create and store large amounts of growth hormone. Rather we experience a lower capacity to “instruct” their release. The volume of GH that is released cannot be properly equated to the exogenous administration of synthetic GH because a set of behavioural characteristics accompany natural GH that differ from those of synthetic GH. Among those characteristics are concentrated pulsatile release, which upon binding in mass to growth hormone receptors on the surface of cells initiate signalling cascades that mediate growth events by translocating signalling proteins to the nucleus of the cell where protein transcription and metabolic events occur.

These very important signalling pathways desensitize to Growth Hormone’s initiating effects and need to experience an absence of Growth Hormone in order to reset and be ready to act again. This cannot happen when a synthetic growth hormone is administered, so a “burn out” of receptors occurs.

The initiation of growth hormone release in the pituitary is dependent on a trilogy of hormones:

Somatostatin which is the inhibitory hormone and responsible in large part for the creation of pulsation.

Growth Hormone Releasing Hormone (GHRH) which is the stimulatory hormone responsible for initiating GH release; and

Ghrelin which is a modulating hormone and optimizes the balance between the “on” hormone & the “off” hormone. Before Ghrelin was discovered, the synthetic growth hormone-releasing peptides (GHRPs) were created and are superior to Ghrelin in that they do not share Ghrelin’s lipogenic behaviour. These GHRPs are GHRP-6, GHRP-2, Hexarelin and later Ipamorelin all of which behave in a similar fashion. In the aging adult, these Ghrelin-mimetics or the GHRPs restore a more youthful ability to release GH from the pituitary as they turn down somatostatin’s negative influence, which becomes stronger as we age and turn up growth hormone-releasing hormone’s influence, which becomes weaker as we age.

Growth Hormone Releasing Peptides (GHRP-6, GHRP-2, Hexarelin) are capable of creating a larger pulse of GH on their own then GHRH and they do this with much more consistency and predictability without regard to whether a natural wave or trough of GH is currently taking place.

It is well documented and established that the concurrent administration of Growth Hormone Releasing Hormone (GHRH) and a Growth Hormone Releasing Peptide (GHRP-6, GHRP-2 or Hexarelin) results in the synergistic release of GH from pituitary stores. In other words, if GHRH contributes a GH amount quantified as the number 2 and GHRPs contributed a GH amount quantified as the number 4 the total GH release is not additive (i.e. 2 + 4 = 6). Rather the whole is greater than the sum of the parts such that 2 + 4 = 10.

While the GHRPs (GHRP-6, GHRP-2 and Hexarelin) come in only one half-life form and can generate a GH pulse that lasts a couple of hours, re-administration of a GHRP is required to effect additional pulses.

Growth Hormone Releasing Hormone (GHRH) however, is currently available in several forms, which vary only by their half-lives. Naturally occurring GHRH is either a 40 or 44 amino acid peptide with the bioactive portion residing in the first 29 amino acids. This shortened peptide identical in behaviour and half-life to that of GHRH is called Growth Hormone Releasing Factor and is abbreviated as GRF(1-29).

GRF(1-29) is produced and sold as a drug called Sermorelin. It has a short-half-life measured in minutes.

To increase the stability and half-life of GRF(1-29) four amino acid changes were made to its structure. These changes increase the half-life beyond 30 minutes, which is more than sufficient to exert a sustained effect which will maximize a GH pulse. This form is often called tetrasubstituted GRF(1-29) (or modified) and unfortunately & confusingly mislabelled as CJC-1295.

Note that some may also refer to this as CJC-1295 without the DAC (Drug Affinity Complex).

Frequent dosing of either the aforementioned modified GRF(1-29) or regular GRF(1-29) is required and as previously indicated works synergistically with a GHRP.

To create a more convenient long-lasting GHRH, a compound known as CJC-1295 was created. This compound is identical to the aforementioned modified GRF(1-29) with the addition of the amino acid Lysine which links to a non-peptide molecule known as a “Drug Affinity Complex (DAC)”. This complex allows GRF(1-29) to bind to albumin post-injection in plasma and extends its half-life to that of days. CJC-1295 results in continual GH bleed. Although natural pulsation still occurs, CJC-1295 does nothing to increase those pulses. Instead, it raises base levels of GH and creates a more feminized pattern of release. This not desirable.

Modified GRF(1-29) however, when combined with a GHRP brings about a substantial pulse that has desirable effects. This is the most beneficial way to achieve optimal Growth hormone levels.

This is in no way is advocating human use; THIS IS FOR RESEARCH PURPOSES ONLY!!!